Examples of the Laboratory Response Network in Action

In 2001, just weeks after terrorists attacked the World Trade Center in New York City and the Pentagon in Washington, D.C., letters containing spores of anthrax destined for Florida, New York City, and Washington, D.C., infected 22 people, killing five. The LRN played a pivotal role in the quick detection of Bacillus anthracis, the bacteria that causes anthrax.

On Oct. 4, 2001, CDC confirmed the first case of the 2001 anthrax attacks in a 63-year-old Palm Beach County, FL, man who was exposed to B. anthracis at his workplace. The discovery came when clinical specimens taken from the man revealed the organism. The specimens were forwarded to a state public health laboratory that was an LRN member. The state public health laboratory confirmed the anthrax infection and alerted CDC.

Investigators collected environmental and clinical samples from the victim’s workplace, a local hospital, and from sites in North Carolina where the man had traveled just prior to getting sick. Testing performed by LRN laboratories helped determine that exposure occurred at work after being exposed to anthrax that was mailed to the man’s office.

Subsequent testing of postal facilities, U.S. Senate office buildings, and newsgathering organizations’ offices occurred in the weeks and months that followed. Between October and December of 2001, LRN laboratories successfully and accurately tested more than 125,000 samples, which amounted to more than 1 million separate bio-analytical tests. 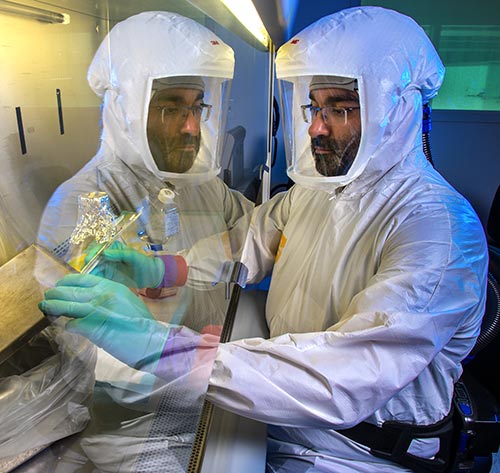 The United States is better prepared for an influenza pandemic as a result of the deployment of an H5N1 (Asian lineage) assay to LRN laboratories nationwide. The new high-confidence, low-cost test gives local public health labs a surveillance tool for the rapid detection of the virus. The H5N1 assay and reagent kit is the result of a collaborative effort involving not only CDC partners, but FDA and LRN-affiliated state public health labs. Divisions within CDC’s Coordinating Center for Infectious Diseases, collaborated to develop the test and reagent kit. LRN labs helped validate test results and the FDA – an LRN partner — facilitated a speedy approval of the assay and reagents as an in vitro diagnostic test. FDA approved the test and reagent kit in February 2006.

BioWatch is an environmental surveillance effort initiated by the Department of Homeland Security. Using a network of air samplers maintained by the Environmental Protection Agency (EPAExternal), the environment of densely populated areas of undisclosed cities is tested around the clock. Filters from these samplers are removed at least once each day and transported to a designated LRN BioWatch laboratory, where the samples are analyzed using PCR technology.

A positive result from these tests would trigger emergency response activities that follow well-established procedures with defined roles and responsibilities for emergency management.

CDC laboratories sequenced the genome for the coronavirus believed to be responsible for the global epidemic of severe acute respiratory syndrome (SARS). The genome sequencing paved the way for LRN-developed PCR assays aimed at identifying the virus. The LRN has also developed reagents to support the SARS PCR. Both the tests and reagents are available to LRN members.

We take your privacy seriously. You can review and change the way we collect information below.

These cookies allow us to count visits and traffic sources so we can measure and improve the performance of our site. They help us to know which pages are the most and least popular and see how visitors move around the site. All information these cookies collect is aggregated and therefore anonymous. If you do not allow these cookies we will not know when you have visited our site, and will not be able to monitor its performance.

Cookies used to enable you to share pages and content that you find interesting on CDC.gov through third party social networking and other websites. These cookies may also be used for advertising purposes by these third parties.

Thank you for taking the time to confirm your preferences. If you need to go back and make any changes, you can always do so by going to our Privacy Policy page.